Notes for a writing project based on fieldwork with Humans in Harmony.

Imagine yourself an observer from another planet coming to study the planet Earth. You arrive and find, perplexingly, a group of human creatures moving, swaying, jumping, weaving together. They seem to be copying each other’s movements in gesture and in time. You’re not sure if you understand the sounds, but they are loud and the humans seem to be shouting with it. In the midst of the cacophony, you realize how strange and wondrous it is to such a mass of creatures unified and synchronized, as if an invisible bond tied them together.

As a human observer you could recognize this scene to be a concert or music event. Perhaps you’ve had that feeling of awe when seeing such events from afar. I remember staring at a mixer in a University plaza where a band was invited and students gathered. They looked like ants in a courtyard from my view, stories above them. And there they were: I couldn’t hear the music from inside the building, but energy moved through the crowd like a connected pulse, and it was comforting.

What is it about music that is so captivating--so transformative--which makes us want to memorize all the lyrics and dance? And in an arena where people come from their own landscapes of childhood, religions, politics, life stories--how is it that we move and sing and create together?

There are moments of melodies that draw in our breaths and make us realize some unseen beauty ever present--the third movement of Beethoven’s Ninth floating and feathery, the trance of Taeyang rhythms punctuated by consonants of voice, a choral hymn that pervades in moments of stillness. Our minds and experiences often go to music-listening in reflecting on what makes music special.

But these ways of value and engagement--aesthetic and cultural heritage--are also classical Western-centric concepts of the arts. They center around the art product with a distinction between the artist or musician as an expert and the listener or audience member as a recipient. They focus more on the music and less on the music-making; less about who are the people making music, and what happens between people when they do? If you are the joining-in singer or hummer or swayer at a pop concert or church service, are you a “maker,” a creator, an artist?

What happens when those who have come to see themselves as the “listeners”--children in foster care, patients, seniors in nursing homes, those with disabilities, and all of us who thought we could never create our music, our songs, our stories--what happens when we become the music-makers?

If books have seasons, then spring is democratic, summer is feminist, fall is poetic, and winter is nostalgic, at least, that was the literary calendar of my 2019. Books are also a more enjoyable way of measuring time as I take stock of the year. It’s like reminiscing on characters in a familiar village, except the village is your mind, and most of the time, its inhabitants are rather observant and chatty friends.

I’ll start with an old one who kept me company throughout the seasons: I first read George Eliot's Middlemarch five years ago, and since then it has been like a best friend who won't shy from revealing your own ridiculousness, capaciously. This time around, I saw more clearly my own misbeliefs in Lydgate’s conviction of submissive loveliness as the ideal of femininity and Dorothea’s glorification of the mind of man and his doomed "Key to All Mythologies.” I found some fates (Ladislaw’s, Mary’s) more admirable; others (Lydgate’s, Rosamund’s) more tragic.

Like the youthful idealism and somber realism that runs through Middlemarch, Jedediah Purdy's For Common Things brought a springtime restlessness that said: You are not alone in your desire for authenticity, sincerity, caring. Politics is how we make decisions together to build our world. It took me to Purdy's A Tolerable Anarchy which asks what we mean when we employ American freedom. How is freedom personal and political? How is it traditional and radical? These practical and utopian dimensions of freedom, along with the matriculation of a sweep of women and minorities in Congress, roused an energy in me that oftentimes felt misplaced against the backdrop of gentle Hudson waters and delicate cherries outside my window.

What Debussy and Sibelius Teach Us About Patriotism 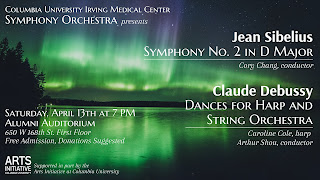 Both Debussy and Sibelius shared a tendency to decry nationalism in their music. Sibelius described his Symphony No. 2 as strictly non-programmatic. Debussy was known to be "without ideology and without convention."

But to what extent are composers, or, for that matter, any of us, impervious to the patriotic sentiments of the time? For Sibelius and Debussy, nationalism—the kind grounded in natural landscape, poetic voice, and shared commonality—permeated their music.

I was inspired to start sharing a list of what I've read from Jill Dolan, a teacher who shaped my writing and how I see the world and engage with it. I thought I'd share those reads, here. Some of them were published in 2018, and most of them are (age-)old. Perhaps some will resonate with you in your search for books to kick off the new year. (Listed in the order that I read them.)