It's time for a fresh look at things.


Zoë Keating is a one-woman orchestra. She uses a cello and a foot-controlled laptop to record layer upon layer of cello, creating intricate, haunting and compelling music. Zoë is known for both her use of technology - which she uses to sample her cello onstage - and for her DIY ethic which has resulted in the sale of over 35,000 copies of her self-released albums and a devoted social media following.
http://www.zoekeating.com

Hear more of Zoe Keating and how she creates her "strange loops" in Quantum Cello from Radiolab (podcast below). The second piece, "The Sun Will Set" at 17:00 is my favorite.

It's a simple question: Left or right?
Of course, the most basic questions are never simple. The more you think, the more you get tangled up in more questions.  Up or down? Over or under? And where will it take me? What determines life's trajectory? How do we choose?

The Future is a question that has undoubtedly flitted (likely done more than flit) across the mind of every person. After all, the question boils down to one thing humans love and fear: uncertainty. Studies in health psychology reveal that patients fear uncertainty more than death (Brynildsen, lecture). Certainly, the state of unknowing can be more nerve-wracking and taxing than the knowledge of the worse-case scenario. But then, as we've discovered in our exploration of the art of science, the uncertain, the ambiguous, the abstract is also where beauty resides and artistry reigns.

In a quest to unravel all of our futures, I turned to my trusty friends Jad and Robert from Radiolab (Radiolab is an NPR program with science episodes and podcasts--lots of psychology and neuroscience--with super-duper sound effects and wonderful storytelling.). The podcast, "How Much Is Too Much?,"  shed some light on how we make choices, and how having options affects us, for better or for worse.

According to Barry Schwartz, the problem of the modern era is that we have too many choices. At the Berkeley Bowl, there are hundreds of oranges and apples to choose from. Surely, having options is a good thing, but how much is too much? Well, studies show that 7 (plus or minus 2) items is our cognitive limit (see the famous The Magical Number Seven, Plus or Minus 2 by George A. Miller). When mentally overloaded with more than 7-ish items, our rational thinking process breaks down. In words, this manifests itself as "overwhelming"! (Sidenote for the disheartened: Consider, what is an item? This can be fuzzy. It could be each letter from list of letters, or according to the podcast, a category of apple traits. But say you blocked a group of letters together into words. Now, you can remember much more than seven-ish letters. For example, N B A F B I T G I F (10 items) becomes only 3 items when blocked as NBA FBI TGIF. This is called "chunking." )

So what does this mean? That sometimes we can't trust our rational brain? Then what should be trust? Our gut? It may sound a bit counterintuitive, but perhaps so. Our emotional response is a quick decision-making system shaped from our whole life's worth of experience. It's an undercover guardian, guiding our decisions before we are even conscious that our path has been set. Antonio Demasio's Somatic Marker Hypothesis claims that when faced with complex and choices, emotional processes can help guide our decisions when cognitive processes are overloaded (body responses associated with outside stimuli are "somatic markers"). This hypothesis was tested in one of psychology's most famous experiments, the Iowa Gambling Task. In this task, participants were presented with 4 decks of cards, with the objective of making as much money as possible. Two decks were "bad" decks, and two decks were "good" decks, but the participants did not know which decks were bad and good. The bad decks had cards that gave higher gains, but also some cards with huge losses, so the net result would be loss. The good decks had cards with low gains, but also low losses, so net result would be gain. 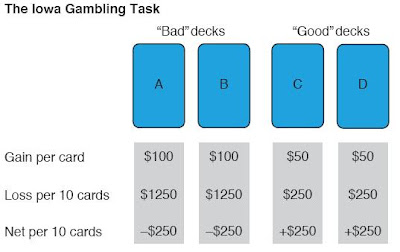 It's comforting, that we're not really as lost as we might think we are. That something is guiding us, helping us choose which deck to pick, which road to take, which direction to turn. It's something that embodies both cognitive and emotional processes. I think that's passion.
at 12:00 AM No comments: