The Art of Medicine


There have been writings about the relation between
medicine and the listening aspects of music, but nothing
on the playing of music. Why do so many doctors pursue
music? Why does the orchestra of doctors in Boston (the
Longwood Symphony) receive audition inquiries on a
daily basis?

Mark Jude Tramo, a neurologist, songwriter/musician,
and director of The Institute for Music and Brain Science
at Harvard and Massachusetts General Hospital, feels that
“there is overlap between the emotional and social aspects
of relating to sick patients and communicating emotion to
others through music…Some would speculate that there is
[also] an overlap between aptitude for science, which most
premeds major in, and for music.”

Lisa Wong—violinist, paediatrician, and president of
the Longwood Symphony Orchestra—speaks for the
many who came to medicine after years dedicated to
serious musicanship. “The music we create builds in us
an emotional strength, sense of identity, and sense of
order. Then it is given away—we play for others, we play in
ensembles. We come to medicine and it is the same thing.
The giving, the service—in music and medicine—is a natural
connection.”

I was surprised to find my eyes watering after reading the article. Surprised to find myself laughing sighs. It struck me as a deeply personal grasp of my own motive for becoming a doctor, and I suppose an afirmation of it in some way other than my own head was more than just reassuring.

The musician touches others through music--a statement banal enough. What gets less noticed are transformations music brings upon the musician. Music is a beautiful gift, and all the more beautiful because it has helped me realize that medicine works the same way, and beyond. Music and medicine are about sharing something beautiful, about creating something extraordinary together—musician and listener, physician and patient. Musicians may craft an experience to bring their listeners adventure, escape, relief; Doctors may craft an experience to bring their patients life. Sometimes life seems so ordinary that we forget that it is extraordinary. Yet, life—is something more beautiful, far richer than any song could express. Medicine, music, and most things I suppose, are about touching others.
at 10:34 PM No comments:

Email ThisBlogThis!Share to TwitterShare to FacebookShare to Pinterest
Labels: medicine, music in medicine 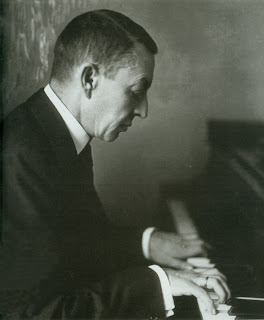 Rachmaninoff fell into a deep depression after the disastrous debut of his First Symphony in 1897, and underwent hypnotherapy as a result. He reportedly produced his Piano Concerto No. 2 through the help of regular sessions. The composer himself stated: “… I heard the same hypnotic formula repeated day after day while I lay half asleep in an armchair in [Dr. Nikolai Dahl]’s study. ‘You will begin to write your concerto. … You will work with great facility. … The concerto will be of excellent quality.’ I felt that Dahl’s treatment had strengthened my nervous system to a miraculous degree. Out of gratitude I dedicated my Second Concerto to him.” (source: Philadelphia Orchestra)

I used to believe that hypnosis was in fact, not an altered state of consciousness, but one in which one finds one's own expectations and the expectations of others vastly altered, so that you believe in yourself. I saw it as a kind of extreme placebo effect. And, as a fervent believer in the power of belief (naturally), I was satisfied with that.

But, I'm beginning to believe in the wonders of hypnosis as going behind the mind, or perhaps more aptly stated, having physical influences (mind to body), as Rachmaninoff remarks, "strengthened my nervous system to a miraculous degree". All this is more compelling by the accepted use of self-hypnosis to allow women to undergo natural childbirth with minimal pain, as one example. I'm starting to wonder, where do we draw the line between mind and body? (Related post: Body and Soul)

Interestingly though, Rachmaninoff's statement reminds me of the power of religion, which is itself the power of belief manifested in a different form--"had strengthened me... to a miraculous degree...out of gratitude I dedicated my Second Concerto to him." I'm a bit of a skeptic of hypnosis and religion, yet I have a respectful sense of awe toward both.

Just a thought. Also another thought--Rach 2 is mad. It's so often associated with madness. In Rachmaninoff's case, it's a journey out of the madness of depression. For the case of the schizoaffect-ed pianist, David Helfgott, it's said to be the piece that brought "madness" upon him. It's mad in so many ways and we love it in so many ways.