The Subjectivity of an Objective Sound: Is the Length of a Note Definite?

Is the length of a note definite? Yes...and no.

And that got me thinking, is the duration of a sound definite? Why, yes, it seems so simple--a sound has a definite start and end, explained by the laws of physics. So why I am still not convinced? Because as a musician, as a pianist, I believe that my body expression, my hand and arm movements and gestures, may shape a listener's perception of the music. Now the question is, does it?

An article by M. Schutz and M. Kubovy from the University of Virginia, titled "Seeing Music: Do We Hear Silent Gestures?" describes a study that addresses the question: Can gestures change the duration of a musical note? The article includes videos of the gestures and easy-to-understand figures, and is also described in more detail at M. Schutz's website. The experiment is described below:


We recorded a world-renowned percussionist performing notes using long and short gestures on a professional quality marimba (a percussion instrument similar to a xylophone), a sample of which is shown in Figure 1. Participants then rated the duration of each note twice: once with the gesture (audio-visual), and once without (audio-alone). In the audio-visual condition they were instructed to ignore visual information and base their ratings on the sound alone.

As shown in Figure 2, although notes produced by long and short gestures were indistinguishable when presented as audio alone, these same notes were judged to be significantly different when presented with the corresponding gesture. This effect occurred despite instructing participants to ignore visual information when making their ratings. Our results indicate that while gesture fails to alter the sound of the note, it (serendipitously) alters the way the note sounds. 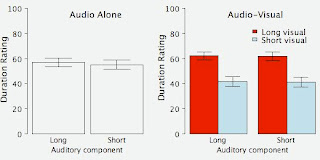 When the subjects were shown a video of the gesture and told to listen to the note (visual and auditory), they rated it correspondingly shorter or longer than when only told to listen to the note (only auditory). Furthermore, a similar study that involved monitoring brain activity of subjects showed that the auditory areas of the brain actually lighted up for correspondingly longer or shorter periods of time with the gesture than without the gesture. This means that in the case of a long gesture, the listeners didn't just think the note sound longer, but actually heard the note as longer.

There's a difference between asking, "Is the duration of a sound definite?", and "Is the duration of a musical note definite?" The answer is yes and no, respectively. The brain aims to understand the world around us, often sacrificing accuracy for understanding, distorting reality in order to process it better. In the case of a pure sound, a sound that isn't processed by a brain, the duration of the sound is definite. But in the case of music, in the case of a musical note that is processed by a brain (for any sound that isn't processed by some listener wouldn't be called music) , the length is subjective. After all, the brain distorts reality, as evidenced by the phenomenon of visual capture--the dominance of visual information over auditory information. In the end, all human experience is subjective, and the question becomes a distinction between laws of nature and laws of human nature.

Is the length of a note definite? Perhaps we should first ask the proverbial question, "If a tree falls in the woods, does it make a sound?"
at 9:43 AM No comments:

The Music Instinct: Science and Song

The Music Instinct: Science and Song is a fascinating 2-hour documentary on the science of music, and premiered June 24, 2009 on PBS. It is a co-production of Thirteen for WNET.org. In this documentary, J. Levitin (author of This is Your Brain on Music and The World in Six Songs) "leads a group of researchers as they investigate music’s fundamental physical structure; its biological, emotional and psychological impact; its brain altering and healing powers and its role in human evolution."

The DVD is available for sale for $24.99 at the online PBS shop here, if you're interested. But even better, you can watch short video clips for free, featuring demonstrations and interviews with Oliver Sacks, Yo-Yo Ma, Bobby McFerrin, Evelyn Glenni, Daniel Barenboim, and many many more. The videos, though short, give great sparks for further exploration, and there are many of them. They are categorized into interviews, music and evolution, music and medicine, music and the brain, performance, and physics of sound--enough to satiate many varied appetites!

Expect to hear more about individual video clips here at the synapse in the near future! Finally, thanks again PBS for bringing us such great programs.
at 9:08 AM No comments:

When studying art and science, we typically look at the science of art, but let's flip things around a little, and look into the art of science.

The Princeton University 2010 Art of Science Competition is about finding art in original scientific research. Check out these ingenious works of art at the Art of Science 2010 Gallery. Here is a description of the exhibition from the website:


The 45 works chosen for the 2010 Art of Science exhibition represent this year’s theme of “energy” which we interpret in the broadest sense. These extraordinary images are not art for art’s sake. Rather, they were produced during the course of scientific research. Entries were chosen for their aesthetic excellence as well as scientific or technical interest.

Synesthesia is a phenomenon of great interest to neuroscientists and artists because it may be the key to understanding creativity, as suggested by eminent neuroscientist V.S. Ramachandran. Synesthesia is a blending of the senses--for example, seeing a certain letter or number or sound as a specific color (the most common form of synesthesia). Other types include colors associated with days of the week (such as in the title of the podcast by Richard E. Cytowic, "Wednesday is Indigo Blue") or even tastes associated with chord types. For example, in the case of E.S., a minor seventh chord tasted bitter, a major third tasted sweet, and a major sixth tasted like cream! Want to experience some synesthesia yourself? Check out http://hypertextopia.com/powertools/synesthete

This excerpt from The Accidental Mind by David J. Linden provides some interesting statistics on synesthesia:


Synesthetes have normal-to-above-normal intelligence and they appear typical in personality tests and general neurological exams. They do not hallucinate or show an unusual incidence of mental illness. Determining the number of synesthetes in the general population is difficult, but recent estimates have been as high as 1 in 200 people. Synesthesia is much more common in women and left-handed people. Although it is hard to exclude sampling bias, it appears, not surprisingly, that synesthetes tend to be drawn to the creative professions, such as writing, visual art, music, and architecture (p. 90).

Although Linden writes that synesthesia occurs in 1 out of 200 people, Cytowic states in his podcast "Wednesday is Indigo Blue: Discovering the Brain of Synesthesia" that at least some degree of synesthesia is actually quite common, occurring 1 out of 20 people! Determining the number of synesthetes is difficult because synesthetes are often embarrassed to share their abnormal ability, or they simply don't realize that what they experience is unique, and may exclaim in astonishment something along the lines of, "You mean the key of G isn't blue to you?!"

A hypothesis to explain synesthesia rests on prenatal pruning. When we are born, our brain is completely connected and the senses are wired together. Yet as we develop, certain connections are eliminated while others are retained. The hypothesis is that when connections are retained that normally shouldn't be (for example, from visual areas to auditory areas), the result is synesthesia. So perhaps we were all synesthetes once! Ramachandran proposes that we still are all slightly synesthetic, with his example of "kiki" and "buba" in his TED talk: VS Ramachandran on your mind.

Now to the good stuff: how does this have to do with creativity? Well, if you think about it, creative thinking involves putting together two seemingly unrelated concepts, such as in the use of metaphor. Alan Rothenberg, prominent researcher of creative processes, argues that janusian thinking, "bringing two opposites together in your mind, holding them there together at the same time, considering their relationships, similarities, pros and cons, and interplay, then creating something new and useful" is a crucial part of the creative process. If this be the case, then wouldn't abnormal connections in the brain that link together "unrelated" areas enhance creativity? More research on synesthesia and creativity to come!

Benjamin Zander on music and passion | Video on TED.com

Benjamin Zander on music and passion Video on TED.com

I came across this and couldn't resist sharing. It's a diversion from the brain--the most inspirational diversion I could ask for, for anyone: scientists, musicians, and non-musicians alike.
at 4:03 PM No comments:

Concerts from the Library of Congress: Music and the Brain

The Library of Congress is having a 2-year series of lectures (08-09, 09-10) relating to new research on music and the brain, and has put up 15-25 minute podcasts previewing each lecture. The topics include music and religion, music and memory, music and crime, to music and language, music and emotion, music and evolution, music and medicine, and more. The speakers include Daniel Levitin, author of This is Your Brain on Music, and his new book, The World in Six Songs (discussed in the podcast), and researchers such as Dr. Patel from UCSD, just to name a few. These podcasts are very interesting, I highly recommend them! Download them to your mp3 and enjoy.

I wish the full lectures were made readily available. If you find any of those, please share. Thanks!
at 2:35 AM 1 comment:

Email ThisBlogThis!Share to TwitterShare to FacebookShare to Pinterest
Labels: brain, Library of Congress, music, music and the brain, neuroscience, podcast

The Birth of The Artistic Synapse

The Artistic Synapse was born from two passions of mine: music and neuroscience. It was originally going to be called "The Artistic Impulse," but I like the idea of the synapse: a place where information is passed down and connections made. This will be where I'll post interesting tidbits of my discoveries. So let the adventure into music and the brain begin.
at 1:58 AM No comments: